By: JANET CHARMAN you lower the drawbridge and cross over as a refugee from patriarchy laden with hormone blockers you come carrying endowments of silicone bearing scalpels yes and your desperation to access all areas –that too we know living in the castle’s shadow as we do how can we accommodate you? in your distaste for the Menses in flood where will you be? your pitch invulnerable to abortion – imperatively you may say: we made the baby float but to me that reads as the royal we when truth be told the roiling is all in her: the m/Other your breasts aren’t in suckle you don’t gestate: your vagina is socially constructed for him: to penetrate y/our internalized lack redacts the organ of exclusive Eros: a clitoris you don’t proceed to hot flash tempests Friend in those moments when you aren’t at home here ask yourself if you’ve kept a spare key what would it take? for you to unlock the keep and help 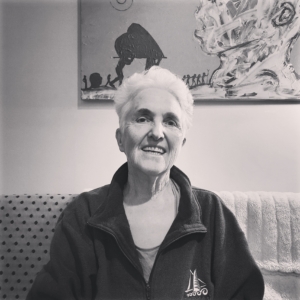 * A Note on the Text

“Trans” as a Misrepresentation of the Subject’s Acquired, Matrixially Feminine Super-Abundance of Compassionate Hospitality for Their Unknown Other

‘I believe that to avoid dealing with any aspect that touches on the female body and bodily experience, to avoid the conceptual potentiality that can be abstracted from the female body and bodily experience, and has consequences with regard to it and its history […] amounts to an unconditional surrender to the dominant, seemingly neutral, symbolic filter that censures both women and men and molds them to its phallic frame.’

It is an incontrovertible fact that every person who has ever lived on this planet was born of woman.  However, in the Matrixial domain, as theorized by Bracha Ettinger, although “woman” is acknowledged as an exclusive sex category, the attributes of Matrixial femininity, which women [pro]creatively generate, are available to us all – whatever our sex, or gender identification (Ettinger, 2006a, 182.3).

In the non-binary domain of the Matrixial feminine it becomes impossible for the subject not to involuntarily and spontaneously recognize the “unknown other” as more important than “the self”. We are all endowed with this propensity: It makes us human. We experience it first in late pre-birth when as the unknown becoming infans we are in besidedness with our unknown becoming m/Other and are susceptible to the transmissive affects and effects of her active womb’s feminine generativity as we are forming from her entrails.

In my view it is therefore not acceptable to designate so called Trans people as somehow “born into the wrong body”. Instead they can be fully affirmed as subjects most profoundly open to the compassionate hospitality of their unknown becoming m/Other – such that they have the strange capacity, post-birth, to creatively express their acquired super-abundance of Matrixial-feminine susceptibility to the “unknown other” as more important than “the self”, in a variety of unpredictable and patriarchally transgressive ways.

At present however, certain so-called Trans subjects, who could be understood correctly as empathic adepts, are socially and culturally coerced – as a result of their exposure to the phallocentric constraints of Patriarchy – into an attempt to reductively become their “unknown other” in a more or less restrictive physical manner. They accomplish this by conforming, in one way or another, to the binary gender-oppositional norms currently prescribed under patriarchy. And in so doing, they are led to deny the material reality of their own-sexed body.

Yet what if those subjects, of either sex, who are currently designated as Trans, were culturally understood, (and understood themselves) as subjects born with a Matrixial-Feminine superabundance of compassionate hospitality for the unknown other?

And what if such empathically gifted subjects were enabled to express their patriarchally non-conformist and profoundly compassionate Matrixial subjectivities freely? Then the sexual identity of the body into which they were born would no longer have to be of central concern to them or anyone else:

In acknowledging the Matrixial Eros of a subject’s spontaneous, very likely patriarchally transgressive, involuntary range of expressions of compassionate hospitality towards the unknown other, society might learn a good deal about full empathy.

As things stand, it seems to me that whenever subjects termed Trans are obstructed from entering the Matrixial domain and hence are prevented from expressing their abundant Matrixial gifts, they are liable to respond to this patriarchal denial-of-access with hysteria and revolt.

Bracha Ettinger’s view of hysteria in women is that: ‘In the phallic framework, hysteria, disguise, masquerade, parody and revolt are subjectivising responses on the part of women to men’s definition of female sexuality.’  (Ettinger, 2006, 183.4)

I now consider that such ‘hysteria […] and revolt’ may also be apparent in those subjects characterized in phallocentric discourse as Trans. However, if recognized as empathic adepts, such people might be understood differently and treated (in every sense) appropriately.

Instead, in a manifestation of their existential suffering, those identifying as Trans may be found to engage in [surgically legitimized] self-harm: Or varieties of health professionals may, under the guise of legitimate “treatment”, engage in suppressive counseling and offer hormonal & psychoactive pharmaceuticals to so-called Trans subjects, who should rather be re-spected [looked back at] (Ettinger, 2009,7-8) as Matrixially-Feminine compassionate hospitality adepts.

Re-spect: ‘This is unarmed re-seeing which is not gazing and not even looking. Re-spect comes, simply, from respicere – to look back at, but, here, where the subject is in touch with the other’s vulnerability by self-fragilisation, the subject will not perform a public shaming.

The subject [mis]diagnosed and objectified as so-called Trans, may undergo repeated surgical traumas from sex-related amputations and reconstructions. As a result of such interventions, their Matrixial gifts may go unrecognized and they may experience known and unknown long-term, perhaps irreversible, physical and mental side effects.

But this is not to deny that such people, even if they [are] identified as compassionate hospitality adepts, may continue to suffer from the prescriptive attitudes towards “the unknown other”, which are embedded in patriarchal society. Indeed, they would in all likelihood attract that very phallocentric dehumanization and denial of agency, of which women (as “other” par excellence) are all too aware.

At the same time, to my mind, the binary ideological conflict that sees so-called Terfs pitted against so-called Trans, is a form of hysteria: A hysteria I consider to be a manifestation of the patriarchal obstruction and suppression of the Matrixial gifts of those on all sides of an issue in which, on the part of “the one”, there might otherwise be realized a superabundance of compassionate hospitality for their “unknown other/s”.

It is tragic and unsupportable that any empathic adept should be coercively restricted to conformity with the particular gender stereotypes patriarchally imposed on the women and men of this, or any other, culture. But if so-called Trans people are enabled to realize the creative energies and human potential of having a superabundance of compassionate hospitality towards their “unknown other/s”, and so are free to actualize their Matrixial-Feminine gifts, I think there will then be irresistible theoretical and practical grounds for an alliance of interests and actions between them and gender critical feminists: May I live to see it.

Ettinger, Bracha L (2006b) From Proto-Ethical Compassion to Responsibility: Besidedness and the Three Primal Mother-Phantasies of Not-Enoughness, Devouring and Abandonment, in ATHENA, Filoso Fijos Studijos, pp100-135. Retrieved from: http://lkti.lt/athena/pdf/2/100-145.pdf

Want to join the discussion?
Feel free to contribute!